Savannah Cat `s are hybrid cats having the serval as the ancestor. The serval is an African wild cat listed in CITES as an endangered species. For the import into the European Union and export from the European Union CITES permits are required for F1 to F4 Savannahs. If you are living in the EU and purchase a hybrid cat from a country belonging to the EU as well, you do not have to apply for CITES permits. Please ask the authorities of your country thoroughly about other import regulations and permits or licenses required to keep a Savannah before you obtain one. Nevertheless consider that Savannah Cats are not zoo animals and by no means should be kept solely in cages or enclosures. They need to be in contact with humans to be happy and healthy, ideally in a house/apartment with an entry to an outside pen or safe balcony. 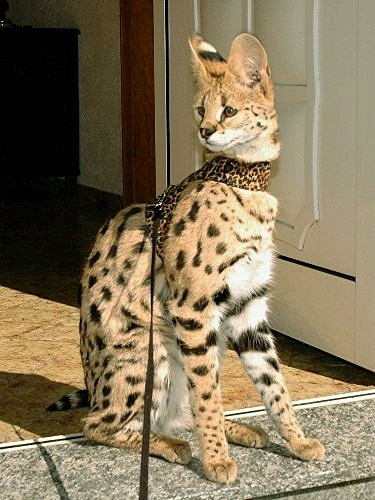 2. Can I keep a Savannah in an apartment?

Like other shorthair cats Savannahs are active and intelligent animals having a certain radius of motion. Therefore the apartment should not be too small, a one or two room home might not be suitable. From F3 and later generations on an enclosure is not necessary, since these Savannahs do not differ much from other shorthair cats in our opinion. However, it is generally for all cats physically and mentally beneficial when they are given the possibility to get some fresh air, sun and wind, and if it is only at a safe balcony or window. We do not recommend to let a Savannah roam freely outside, since the risks are too high. Many Savannahs can be leash trained and love to have a walk outside. Like other cats the Savannah uses the litter box and can be trained very well. The minimal cat furniture should be a cat tree/scratching post, litter box and toys. Please see also the breed description for more information.

3. Does the Savannah get along with children and household pets, does it behave differently than other breeds?

The Savannah is a very sociable cat and does not like to be alone. Hence it should not be kept as the only pet, especially when the owners are not at home most of the day. The same can apply if the other cats in the household are not very active or elderly. In these cases a second cat with a similar temperament and age would be a great companion for the Savannah; best would be two Savannah kittens. Savannah Cats get along very well with other household pets, be it cats or dogs. Due to their affectionate and playful temperament Savannahs make quickly friends with children. There are no great differences to other shorthair cats. Some exceptions are mentioned here: The Savannah is able to jump high and wide and like the serval performs very high jumps straight in the air. Most love water and like to splash around. If given the opportunity the Savannah takes a bath, some even like to swim. Furthermore they are creative and curious. Nothing is safe, they can use everything and convert it to a kitty toy. Usually cat toys often are soon destroyed. Toys for dogs or something made by your own may be more suitable. Old socks, filled with corks or things making interesting noises are the favourites of our cats. Some Savannahs love to play fetch; most can be leash trained and love to have a walk outside in the garden.

4. Does a Savannah need special care or food?

The Savannah Cat can be housed and cared for like any other domestic cat. Cats not considered for breeding should be altered accordingly. Balanced raw food (BARF) is the most natural and healthy diet for every cat when you think of what cats eat in the wild. Otherwise you can feed a high quality commercial canned food and supplement it now and then with chunks or raw meat or day old chicks for teeth cleaning.

5. What are the character and behaviour of a Savannah like?

Savannah Cats are usually very affectionate and outgoing. Sometimes it could happen that you can observe the wild ancestor coming through. This appears mainly while playing, which usually shows the high energy of this breed, especially when the cat is intensely playing. However, our kittens get already some education from us learning not to use the claws and teeth rigorously in their new home. Savannahs are easily trained, but like with other cats one should respect that they have their own mind and do not like certain things varying individually from cat to cat. Most Savannahs do not like being retained, some do not want to be picked up. However, many Savannahs happily love to be held and carried around while purring or laying in the lap being petted.

6. How large does a Savannah get?

This question can’t be answered in general, since it depends on many factors. F1 Savannahs are very tall. In the following generations one can find differences, resulting from various matings and selections. Even siblings of the same litter can differ, therefore a resputable breeder can only give an estimation without making any claims about the adult size of the kitten. From experience it can be said that kittens from Savannah x Savannah breedings usually get larger und typier, since the serval genes are coming through from both parents and the theoretical serval amount in the kittens is higher. Furthermore one can´t equate size with weight and compare the Savannah on the basis of the weight with other breeds, since the Savannah is built slender and long legged. Most the time a Savannah is weighing less than a sturdier breed of cat at less size. However, also Savannahs of the later generations usually get larger than other domestic cats. Especially the Savannah males can reach a considerable size; additionally one has to consider that Savannahs are usually not fully grown before they are at least 2 or 3 years old.

The F3 and F4 cats from our cattery are mentioned here as an example for size, which have reached weights between 6 and 11 kg (13 and 24 lbs) and shoulder heights of 35 to 42 cm (14 to 16.5 inches). This shows also how Savannahs can differ. Furthermore our F6 stud Kiwanga Ghana is for the later generation very large at a shoulder height of 42 cm (16.6 inches) and a weight of over 9 kg (20 lbs.). This once more shows that it does not depend always on generation and later generations are also able to reach an impressive size. Last but not least the lines and careful breeding of the individual breeder is very important as well.

7. Is the Savannah recognized as a breed and can be exhibited at cat shows?

The Savannah is an accepted breed within TICA and has a Standard. Savannahs can be shown in Championship Class at TICA shows being able to gain titles along with all other breeds. To achieve this was an aim breeders have worked towards for many years. Frequently questions occur what the A, B, C and SBT designation in the registration numbers mean, therefore a short explanation:

SBT stands for „Stud Book Traditional“ and means purebred and the true breed with at least three generations (parents, grandparents and great-grandparents) solely Savannahs behind. This is of course not possible for F1 – F3 cats, therefore those are called „Foundation“ and can´t be shown. An F1 is always A registered, F2 can be F2 A or F2 B and F3 accordingly F3 A, B or C. Only from F4 on it is possible to get SBT and to show those.

8. Which specifics are to be considered in breeding Savannahs?

The Savannah is a young breed that was first established in 1994. F1, F2, F3 etc. indicates how many generations the cat is removed from the serval. Accordingly an F1 Savannah has a serval as the father and at least 50 % serval amount, an F2 a serval as the grandfather and 25 % serval amount, F3 12,5 %, F4 6,25 % etc. Like other breeds of hybrid cat the males of the first few generations are sterile, therefore only Savannah males from the 5th and 6th generation on can be used for breeding. Very few fertile F4 males exist, but they are an absolute rarity. In the beginning the Savannah females were bred to males of other breeds of spotted cats – they are called outcross. In TICA permissible outcrosses for the Savannah breed were Egyptian Mau, Ocicat, Oriental Shorthair and Domestic Shorthair. Since the breed has reached Championship status outcrosses are not permissible any longer. Nowadays there are enough fertile Savannah males available, so that Savannah to Savannah breedings are the standard meanwhile instead of using outcrosses.

At Kiwanga we only breed Savannah x Savannah together, so that the kittens get a higher theoretical serval percentage than the above mentioned numbers in each generation. Due to the fact that the serval traits from both parents are inherited in the offspring one also hopes to get cats of better type, which contributes to the development of the breed. Depending on the mating and if still outcrosses are used it is understandable that one can find variations in the appearance of cats in different catteries.

9. What is the price of a Savannah?

The prices are higher than for a more common breed of cat and depend on generation respectively serval amount, whether the kitten is from a Savannah x Savannah breeding or even purebred (SBT), quality of the kitten and if it is for showing, breeding or a pet. As a rule one can say the most expensive is F1, then F2, F3 etc. follow along. Currently we are breeding F2 – F6 kittens. Prices start at around 1200 Euros for pets at the later generations and can be as high as several thousands of Euros. Breeder and show cats are higher priced than pets.

The Savannah Cat is one of the most popular breeds in the world. Therefore depending on the generation you are looking for sometimes a waiting time can be expected to get a special kitten. The Kittens page informs you about currently available kittens. When you are interested in a kitten from our cattery, we like to know a bit about you in order to find the best possible home for every kitten and also to help you to choose the best fitting kitten for you and your living situation.

Kiwanga is the first and longest standing Savannah cattery in Europe, since we already started breeding this wonderful breed in the year 2000 when the Savannah first only existed in the USA and Canada. Accordingly over the years we have built our own line that is renowned and sought after in the whole world. Visit us also on Facebook to learn more about our cats and get more pictures as well as actual information.